Hunter Pacing and other things

I took Jack and Crystal’s horse Willy to a hunter pace down in Upper Marlboro last weekend. Dustin brought his horse Wrangler as well and Katrina came too. The first plan was for me to go around the high course with some HCIBH friends on Jack and then have Katrina ride Jack around the low course as I led aboard Willy. Well, that plan went out the window.

As a team of three, we headed out onto the low course first. Dustin on Wrangler, Katrina on Willy and me leading on Jack. Jack spooked at the first few fences and I had Katrina lead the group. For the record, Willy is by far the most perfect horse in the world! The course was good with long stretches that we trotted, and then walked at the end. All students made it through in one piece (their first hunter pace) and what was really cool was how both Willy and Jack barely broke a sweat. It is amazing how fit foxhunters can be!

Next I headed out onto the high course with Dale and some HCIBH folks. This was my time to practice everything Joe had taught me, even with silly comments from various people making fun of all the straps and gear I had on Jack. Important to just ignore that and move forward. Jack was great. Totally settled and jumped well. He was a bit more strong than at Joe’s but that was ok. We cruised around the course at a fairly good clip. Jack’s fitness is insane right now! He recovered from that trip in way less than 5min.

After that, Alice and I took Stocky and Willy around the lows for a second trip. Alice wanted to make Stocky lead but not until we were out of sight of the onlookers (stage fright on Alice’s part). Willy was perfect as usual, and Stocky took the lead and did well. What was really cool was that by riding behind Alice, I could really help her keep Stocky in line and keep him in front of her leg. I could see when he was about to back off or shy at something and could yell instructions so that Alice fixed it before a stop occurred. It was kind of like we were both riding the horse. Really a cool perspective actually.

At the end of the day, Alice and I got a third place ribbon! And our Dustin, Katrina, Jack team got sixth. Nothing for our high team, which went way to fast for optimum. 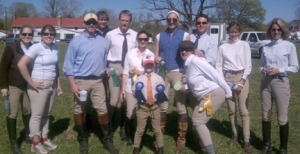 This weekend I’ll be joining the PPF crew and heading up to New Market for their hunter pace. Planning to ride Jack around the highs at least once and Willy around the lows. Then ride a few horses for Dale at what ever levels she needs me to.

Last week we got most of the Redland xc jumps in place! I’m am totally stressing but things are falling into place nicely. I think I’ve checked my to do list so many times at this point that really I’m not sure what could go wrong… which of course means I have probably forgotten something huge. Let’s hope not.

Easter was fairly uneventful once I actually got to Fort Belvoir. My dad thought my duely would fit on the GW Parkway. It didn’t. I had one wheel on the white line and the other across the yellow line for the entire drive down. Not fun. Great to see family though and my aunt/uncle’s new place is really cute.

Tried to take a pic of the Washington DC skyline but was focusing too much on staying on my side of the road.

Today I xc schooled this cute mare we  have on loan at Waredaca for pony club. She’s a bit quick but brave and was obviously loving every minute of it. I’m just hoping she’s not to quick for our pony club kids. They have ridden her in the ring several times and are fine. Oh, and it snowed while we were schooling. No joke. Snow. And then it snowed off and on all day. Seriously. I’m not sure what else to say about that.

The rest of the day I spent writing articles for The Equiery’s May issue. Took a break to go running and then have been back on the computer. Another break for evening feeding and now I actually think I’m all done writing. Thank goodness.

Need to figure out what to make for dinner but right now, just chilling and listening to music.

This entry was posted in Eventing, Foxhunting, Horses in Training, Riding Students. Bookmark the permalink.